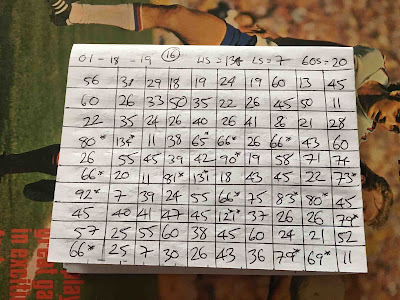 Look at the date this blog was written. A backlog, people. No specially selected book, as a backdrop with the piss-poor excuses for why I haven't read it. Just a the facts, mam. I have a lot of these to steam through. Maybe I'll provide the colour commentary once they are all on the blog.

. . .  And you just know that I will have mislaid at least one sheet.


But I will use the this rush through as a cheap excuse to post music videos from YouTube. Why not? I need a soundtrack whilst I do this. Next up is a Paul Weller album track that I'd never heard before. It's off the 2015 album Saturn's Pattern album, an album which totally passed me by. If this track is anything to go by, I think I've been unfair and I need to seek it out. It's a bit noodly, a bit meandering but he's always had that six or seven minute track on his solo albums. I think if I'd heard it in normal circumstances, it probably would have passed me by but on this occasion I sought it out after reading a thread on a Facebook Paul Weller discussion group about lost album tracks that have been overlooked. From the thread, it appears I'm not the only PW fan who loved the early solo albums only to be a bit hot and cold as the years wore on. The common theme is that we all seem to carry the torch for The Style Council (unlike a lot of Jam fans) and we all feel he took a wrong turn when he fell in with the Lad Rock wankers in the mid to late 90s.