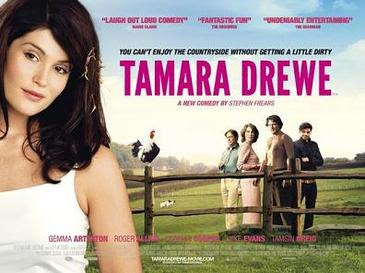 An end of the month thing. The most popular posts on that blog in the past month: Email ThisBlogThis!Share to TwitterShare to FacebookShare to Pinterest
Labels: Socialist Standard Past and Present Blog, Start of the Month Socialist 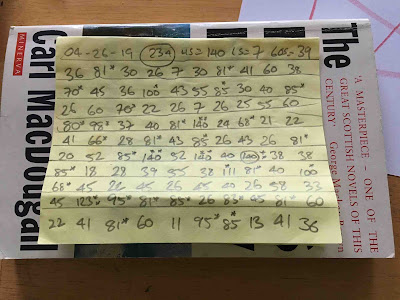 Just watched Celtic stumble to a 1-0 victory against a parked bus Kilmarnock. I don't think Lenny's getting the job, as much as I'd like for him to get it. Hopefully Aberdeen get a result against Ranjurs tomorrow, and that will put it all to bed for another season.

The book in the picture? Carl MacDougall's The Light's Below.  Have I read it? I have; many, many years ago. It was during my read any author with Mac or Mc in their surname phase. (A longer phase than you might think.) That's not the copy I read. That's long gone. The copy of the book in the picture I picked up for a dollar at The Strand on Broadway. Christ, I miss that bookshop. Loved it. Or at least, I loved the bookcarts outside the shop with all the cheap books that they were trying to punt. I spent many a happy hour scouring through all the old books.

Did I enjoy the book? To be honest, I can't remember. It must be twenty years since I've read it. However, I have read MacDougall's Stone Over Water twice, and that's a novel I really enjoyed. It was very much in the same spirit as Alan Spence's Glasgow novels and short stories, and that can't be a bad thing.

A couple of links: 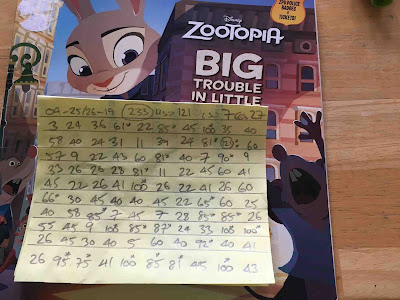 It doesn't rain but it pours. This time the basement. Flooded again. How many times now? 4, maybe 5. What an 'effing nightmare. More stuff ruined and busted.

Nearly hit a 180 but it doesn't really matter in the grand scheme of things.

The book in the picture?  Have I read it? Nope. Saw the film in the cinema with the kids. The sloths were the best thing about it.
Posted by Imposs1904 at 2:24 pm No comments: Links to this post

A school in Hebron

It's funny how you sometimes find things on Facebook that are simply wonderful.

Email ThisBlogThis!Share to TwitterShare to FacebookShare to Pinterest
Labels: Palestine, The Good Stuff you find on Facebook 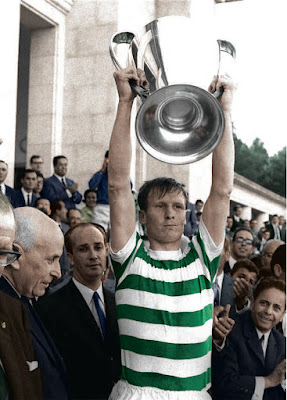 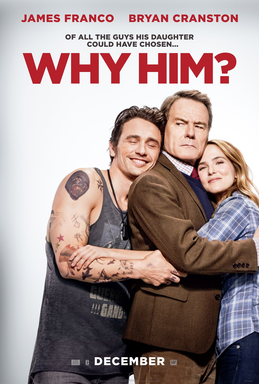 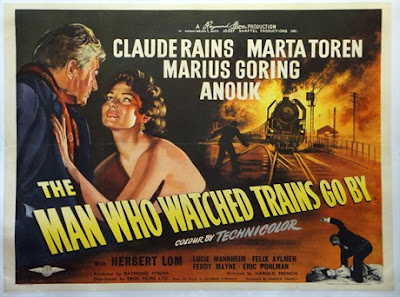 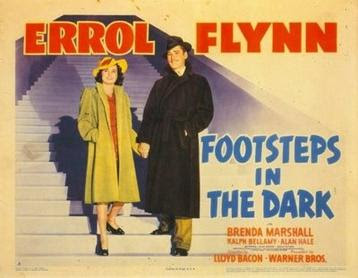 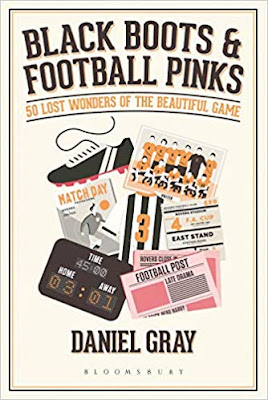 This stiller world was embodied in players’ under­stated goal celebrations. Here were climactic moments responded to without choreography, ego or hands lifted to ears in front of the away end. A scoring player “could seem modest to the point of embarrassment. It was as if he did not want to take all of the glory and wished to silently convey that a goal belonged to everyone. There was poignancy in this reaction for those on the other side of the advertising hoardings. A scorer’s lack of self-congratulation tacitly acknowledged that a goal was a supporter’s moment. Here was the star actor, pointing to the audience during curtain-call applause.

His celebration was rarely more flamboyant than the raising of an arm. Perhaps he was taking time to drink in the roar of the crowd, even to look at those smiling faces. He would take the back pats and rigid hugs of teammates, the feeble handshakes and the cupped taps to the back of his head. Then, a jog back to the halfway line, where he could catch breath with hands rested above knees. He looked to the ball now moored on the centre-spot and gave inward thanks for what it had given him, and what it had given that crowd.

In truth, he deserved to be more exultant. None of us would have minded. Instead, he was left to revel in a goal in his own time, staring into space among the racket of the communal bath. There could now rise across his face the grin of a fulfilled man. 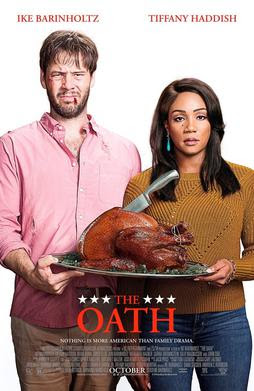 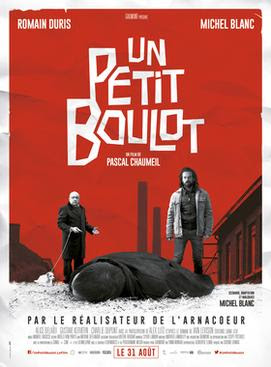 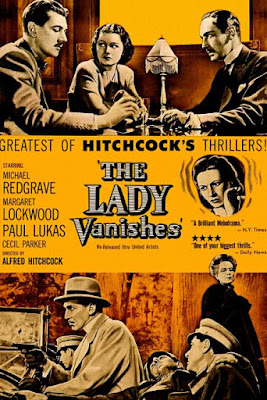 It's been a while  . . . well, a  month if you have to quibble. Just nice to get the monkey off my back. And it's official: I have now hit more 180s in Indiana than I have in New York. (That last line's a bit garbled but I'm tired.) 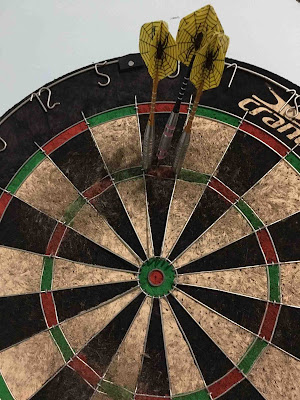 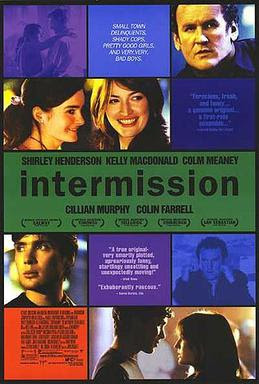 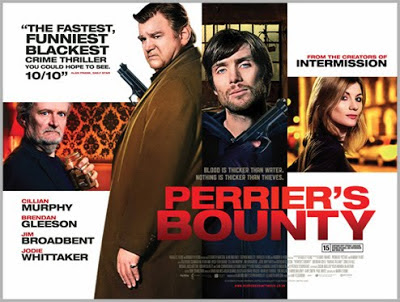 Round 203: Running On Empty 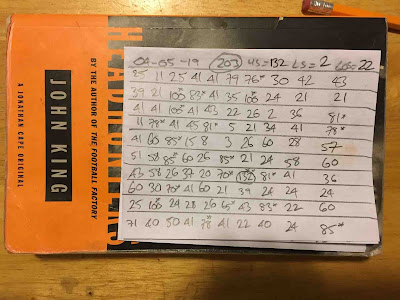 Burning the candle at both ends. In between chucking shit out and waiting for the computer to charge - my charger doesn't love me - I decided to throw some darts. I'm knackered, and I can feel it in my arm but, for all that, the darts were just a wee bit off the usual. Go figure. Bottled another 180. Hit a 12 on the third dart this time. I forgot to take my own advice about shutting my eyes.

The book in the picture? John King's Headhunters. Have I read it? Yep, twenty plus years ago. I may have read it in the same work place as Toby Litt's Beatniks. I know it was one of John King's books in the Football Factory trilogy. Would I read it again? Probably not. I seem to be remember that none of the books in the trilogy really gripped me, but I read them all the same.

On a separate note, Jim Broadbent can't do a Dublin accent to save his life. 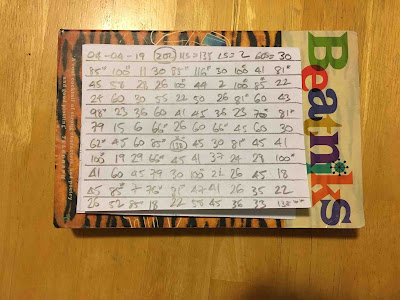 For some reason I was listening to that episode of The Sound of the Eighties again whilst throwing the darts. No idea why. I guess it was still on the phone and I couldn't be arsed to switch to something else. Anything to add to that show? Nothing much. Transvision Vamp are still shit. Early New Order sounded like Josef K, and 80s pop music really did turn irredeemably shit after 1985. Which sucked for me 'cos it was a formative time when I should have been lapping music up. I lapped something up, but it was thin gruel in comparison to music from the first half of the 80s.

Bingewatching the first season of Fleabag on Amazon. Grimly fascinating. Enjoying it more than I did first time round. I feel guilty watching it 'cos posh people usually get on my tits. It's why I've never watched Downton Abbey. 2016 seems so long ago  . . . or maybe it was never meant to be that kind of show.

The darts? I threw for a 180 but I bottled it. And I by bottled it, I mean the third dart hit the 18. That some jitters. I think next time I throw for a 180 I will close my eyes. What's the worse that can happen.

The book in the picture?  Toby Litt's Beatniks. Have I read it? Yep, about 20 years ago. I must have read it within months of it coming out. A random buy that bore fruit. I seem to remember reading it during teabreaks and lunch breaks whilst working nights on a nighshift in Hemel in 97 or 98. Would I read it again? I would . . . if I got my reading mojo back. I always thought it would make a great film.  There were rumours that it'd been optioned for a film but at the time of writing . . .  If Nick Hornby had written it  . . .  Two unfinished sentences for the price of one.

And, let's be honest, Beatniks were always more interesting than the Hippies.
Posted by Imposs1904 at 12:10 am No comments: Links to this post 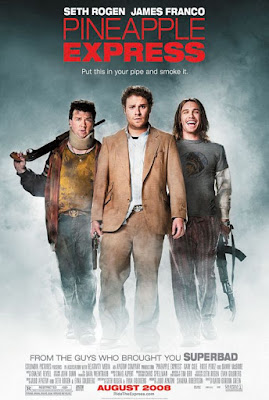 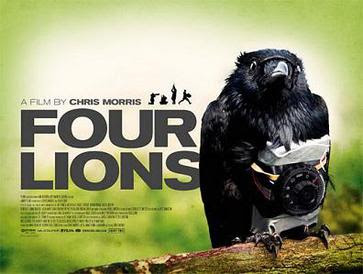 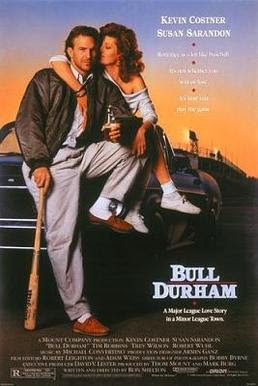