Armchair Socialist turns up to his first demo . . . 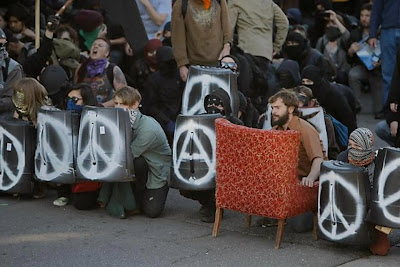 Note to self but not to Self

What was that vivid* dream about Will Self all about?

I had to mention it on the blog, because this time tomorrow I will have forgotten about it.

Email ThisBlogThis!Share to TwitterShare to FacebookShare to Pinterest
Labels: Dreams, Will Self 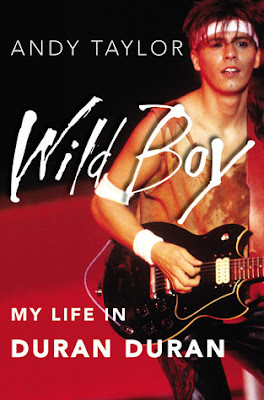 There was worse to come. "New Moon on Monday" was our least favourite video of all. Everybody in the band hates it, particularly the dreadful scene at the end where we all dance together. Even today, I cringe and leave the room if anyone plays the video. We shot it just outside Paris on the third of January 1984, and we were all miserable because we hadn't had a long enough Christmas holiday. Our management had convinced us to theme it on the French Revolution, and it also had historic references to the French Resistance - but, to be honest, it was just a load of gibberish. The set was dark and cold, and we spent most of the day drinking alcohol. By the time we were dancing at the end I was half cut. It is one of the few times I've seen Nick dance (watch his shoulders moving up and down if you ever get another chance to see it!). We were very uncomfortable with the whole thing. After "New Moon on Monday," we all thought, Bollocks - let's do something that's fundamental and solid.

The answer was a spectacular live video in the form of "The Reflex."
Posted by Imposs1904 at 1:30 am 1 comment: Links to this post 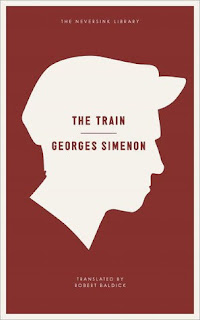 I sometimes say "we" when talking of the people in our train because, on certain points, I know that our reactions were the same. But on this point I speak for myself, although I am convinced that I wasn't the only one in my position.

A break had occurred. That didn't mean that the past had ceased to exist, still less that I repudiated my family and had stopped loving them.

It was just that, for an indeterminate period, I was living on another level, where the values had nothing in common with those of my previous existence.

I might say that I was living on two levels at once, but that for the moment the one which counted was the new one, represented by our car with its smell of the stables, by faces I hadn't known a few days before, by the baskets of sandwiches carried by the young ladies with the arm bands, and by Anna.

I am convinced that she understood me. She no longer tried to cheer me up by telling me, for instance, that my wife and daughter were in no danger and that I would soon find them again.

Something she had said that morning came back to me.

She took me for a strong-minded character, and I suspect that that is why she attached herself to me. At that time I knew nothing of her life, apart from the reference she had made to the Namur prison, and I know little more now. It is obvious that she had no ties, nothing solid to lean on.
Posted by Imposs1904 at 9:20 am 1 comment: Links to this post 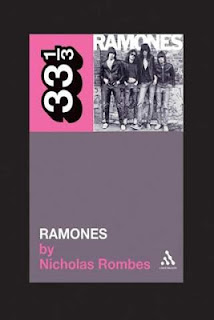 The quality that insured the Ramones' first album would become one of the most important records in modern rock was the same quality that guaranteed they would never have the mainstream success in their time: a unified vision, the force of a single idea. There is a purity to Ramones that is almost overwhelming and frightening. Basically, the Ramones are the only punk group from the 1970s to have maintained their vision for so long, without compromise -  a vision fully and completely expressed on their very first album. In America, there is a skepticism and wariness about any artistic or cultural form that doesn't evolve, that doesn't grow. There is no more damning critique than the charge of repeating yourself. And yet punk was precisely about repetition; its art lay in the rejection of elaboration. And nowhere is this more evident than on the Ramones' first album, whose unforgiving and fearful  symmetry announced the arrival of a sound so pure it did not require change.
Posted by Imposs1904 at 9:47 am No comments: Links to this post

Via the Football Shirts website the image below is of the supposed Celtic jersey for the 2013-2014 season.

Surely it's a wind up? Take away the badge and the sponsor's name and it looks like a sweater Del Boy Trotter would be wearing with a turtle neck in an Only Fools and Horses Christmas Special circa 1986. 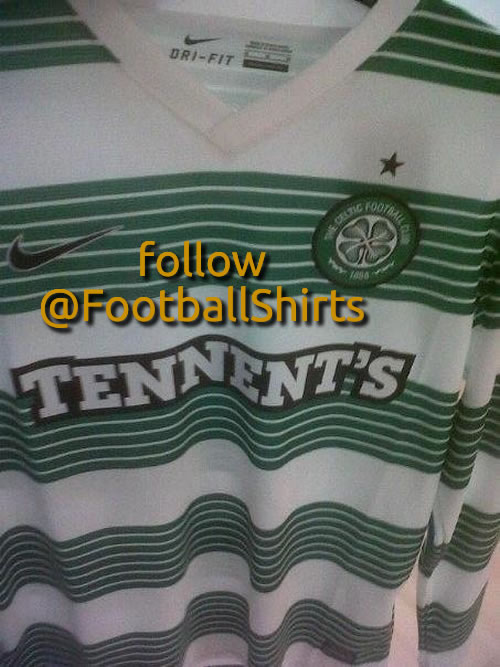 What Not To Wear . . . on your face or when collecting awards

It's probably a  cheeky mash-up/juxtaposition of images but I love it anyway. The image below is Ronaldo's supposed reaction to Lionel Messi winning the Ballon d'Or for the fourth year in a row.

If I was one of the head honchos at Barca, I'd hire a PI to investigate Ronaldo, to ensure he doesn't have a Netflix account and, if he does, that he never rents Amadeus.

Sadly, Pepe Carvalho is not available for the gig. It would have been a blast.
Posted by Imposs1904 at 1:15 pm No comments: Links to this post 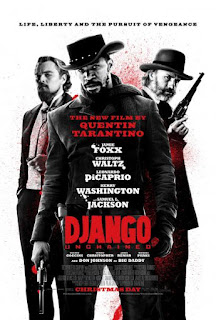 Barca: The Making of the Greatest Team in the World by Graham Hunter (BackPage Press 2012) 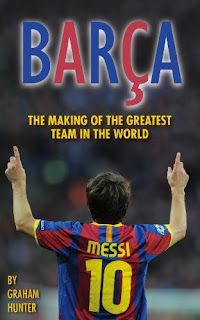 I distinctly remember the first time I saw Leo Messi play football. One of us was patently off-form that day. I came away thinking that Joan Verdú, who was playing in what we would now consider Messi’s best position, completely out-shone him and that the genius acknowledged as the greatest footballer of modern times had a bit of a stinker.

It was autumn 2003 at Barça’s Mini Estadi, the 17,000-capacity arena a few hundred metres from the Camp Nou. My friend, Rob Moore, had asked me along to watch the Barça B captain, Arnau Riera, because he was considering representing him. Messi’s name, of course, already had a buzz surrounding it, but that day he played on the left wing in a 4–2–3–1 formation and, although there were one or two of those delightful dribbles, he looked sluggish and disinterested.

The next time I saw him was the night he scored his first goal for Barcelona – against Albacete at the Camp Nou in spring 2005. No one who was there doubted we were witnessing the arrival of a special footballer.
Posted by Imposs1904 at 12:35 am No comments: Links to this post 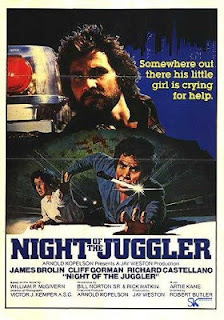 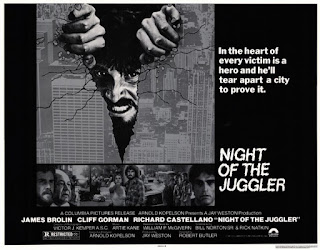 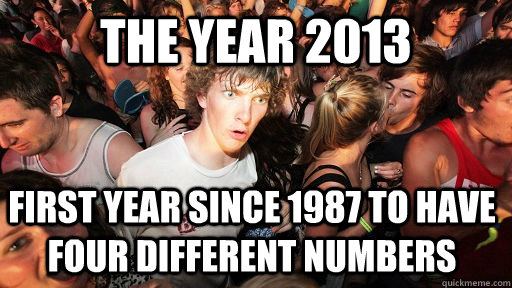 Email ThisBlogThis!Share to TwitterShare to FacebookShare to Pinterest
Labels: New Year Resolutions, The shit you find on Facebook 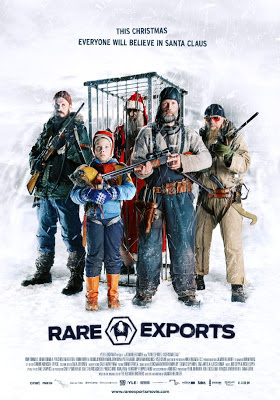