I've Thought Long and Hard About This

Why is it that Thursday* is the least popular day of the week when it comes to namechecking days in song titles? It's buggered up a kick-arse playlist that I was compiling.

*Yes, I'm aware of Bowie's 'Thursday's Child', but it's not one of his best songs and I don't think it should sneak in by default. Next thing you know I'll be letting my standards slip by putting the Cure's 'Friday, I'm in Love' on the playlist, and I hate that bastard song.

Buick and Crump on the Alternative to Capitalism

It's not the internet exclusive that I promised Stuart of From Despair To Where blogging fame, but I hope the following link is of interest to the good readers of this humble blog for the time being. The Alternative to Capitalism is the last chapter of the Adam Buick and the late John Crump penned book, State Capitalism: the Wages System Under New Management.

Dating from 1986 the book is long out of print - and many would say that with the collapse of the Soviet Union, the book is more of a historical curiousity only consulted nowadays by students and academics alike - but the chapter that is now online is still especially relevant in the here and now because it goes into some detail in discussing the economic calculation and calculation in kind debate that, for many, is the ultimate sticking point for why a socialist world - a society based on the common ownership of the means of production and distribution - is an impossibility.

Thanks to Adam for allowing me to post the chapter on the internet.

Did I ever mention that Glasgow Celtic are the greatest soccer football club in the world? Think about it: the Celtic team that the won the European Cup in 1967 was the best team that ever walked on grass, artificial or otherwise, and what with god Henrik Larsson setting up the two goals that resulted in Barcelona winning this year's European Champions League, it was Celtic winning the competition in all but name.

What's that you say? What about Di Stefano, Puskas, Pele, Eusebio, Beckenbauer, Cruyff, Platini, Maradona, Zidane, Ronaldbigteeth or Rooney? If they never played for Celtic, then they were never great players. That's why Jimmy Johnstone was the greatest footballer who ever pulled on a shirt, and he was better looking than David Beckham to boot.

OK, the cheap wine is starting to wear off so before I finally sober up I thought I'd point you in the direction of the editorial from the forthcoming June issue of the Socialist Standard: They Call It Sport M'Lud.

I'm off to stock up on a month's supply of pierogis, potato vodka and all the Kieslowski DVDs I can get my hands on to help me brush up on my Polish. What with Maciej Zurawski and Artur Boruc in the squad, it has to be Poland for the World Cup. And with my colouring and newly acquired short haircut, as long as I only open my mouth to eat the food and drink the spirits, I think I may be able to pass myself off as a member of the local Polish community in Brooklyn.

I'm Just Looking For A Random Excuse To Post This Cartoon 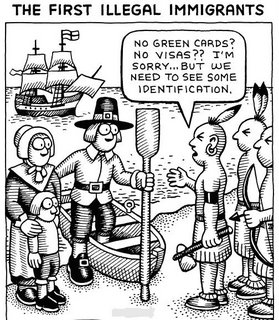 "Blatchford . . . Asquith . . . the Weekly Dispatch?" Either it's a byline from an old Shoot annual - sorry, that would be B.Latchford, not Blatchford* - or I've been rooting around the dusty vaults of the Socialist Standard archive to find some article to post at random so that I have a cheap excuse to upload the nice cartoon above. Click on the ambiguous title below to find out the correct answer:

Who is the Alien? The Working Class View of the Burning Question

*I'm so sharp sometimes, I think a number of people have the sudden urge to cut me.

Capitalism or a Habitable Planet?

From Charlotte Bronte's novel The Professor. (Hat tip - Mancunian Dave B. on the WSM Forum)

"Why, at dawn to-morrow, must I repair to Crimsworth's mill? All that night did I ask myself these questions, and all that night fiercely demanded of my soul an answer. I got no sleep; my head burned, my feet froze; at last the factory bells rang, and I sprang from my bed with other slaves."

"I cannot please though I toil like a slave." "Work, work!" reiterated the inward voice. "I may work, it will do no good," I growled; but nevertheless I drew out a packet of letters and commenced my task-- task thankless and bitter as that of the Israelite crawling over the sun-baked fields of Egypt in search of straw and stubble wherewith to accomplish his tale of bricks"

For the Record - Henrik Larsson 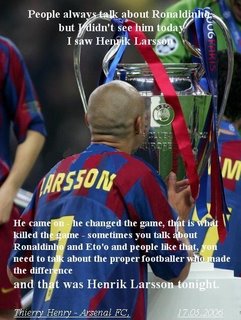 Not that I really needed reminding but Dave O. blogs about why Bono and co are such insufferable pricks.
Posted by Imposs1904 at 5:26 pm 1 comment: Links to this post

Today marks the eightieth anniversary of the ending of the British General Strike. The following is an article from that time which analyses the Strike and its failings: The General Strike Fiasco: Its Causes and Effects
Posted by Imposs1904 at 1:19 pm 2 comments: Links to this post