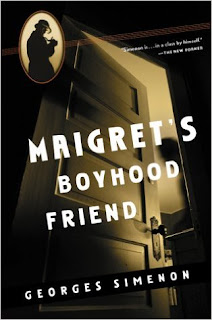 The fly circled three times around his head before alighting on the top left-hand corner of the report on which he was making notes.

With pencil poised, Maigret eyed it with amused curiosity. The fly had repeated this maneuver over and over again in the past half-hour. At any rate, Maigret presumed that it was the same fly. It seemed to be the only one in the office.

Each time, it circled once or twice in a patch of sunlight, then buzzed around the Chief Superintendent’s head, and finally came to rest on the papers on his desk. And there it stayed for a while, lazily rubbing its legs together and looking at him with an air of defiance.

Was it really looking at him? And if so, what did it take this huge mound of flesh to be—for that was how he must appear to it.

He was at pains not to frighten it away. He sat motionless, with pencil still poised above his papers, until, quite suddenly, the fly took off and vanished through the open window.

It was the middle of June. From time to time a gentle breeze stirred the air in the office, where Maigret, in shirt sleeves, sat contentedly smoking his pipe. He had set aside this afternoon to read through his inspectors’ reports, and was doing so with exemplary patience.

Nine or ten times, the fly had returned to alight on his papers, always on the same spot. It was almost as though it had established a kind of relationship with him.

It was an odd coincidence. The sunshine, the little gusts of cooler air blowing through the window, the intriguing antics of the fly, all served to remind him of his schooldays, when a fly on his desk had often engaged a larger share of his interest than the teacher who had the class.

There was a discreet knock at the door. It was old Joseph, the messenger, bearing an engraved visiting card, which read: Léon Florentin, Antique Dealer.

“How old would you say he was?”

“That’s right. Very tall and thin, with a real mop of gray hair.”

Yes, that was the man, all right. Florentin, who had been at school with him, at the Lycée Banville in Moulins, the clown of the class.

He had forgotten the fly, which, feeling slighted perhaps, seemed to have gone for good. There was a brief, embarrassed silence as the two men looked at one another. This was only their second meeting since their school days in Moulins. The first had been a chance encounter in the street about twenty years ago. Florentin, very well groomed, had been accompanied by an attractive and elegant woman.

“This is my old school friend, Maigret. He’s a police officer.”

“Allow me to introduce my wife, Monique.”

Then, as now, the sun was shining. They had really had nothing to say to one another.

“How are things? Still happy in your work?”

“Are you living in Paris?”

“Yes. Sixty-two Boulevard Haussmann. But I travel a good deal on business. I’ve just come back from Istanbul. We must get together some time, the two of us, and you and Madame Maigret… I suppose you’re married?”

The encounter had been something of an embarrassment to both of them. The couple’s pale green, open sports car had been parked nearby, and they had got into it and driven off, leaving Maigret to continue on his way.

The Florentin now facing Maigret across his desk was more seedy than the dashing figure he had seemed to be on the Place de la Madeleine. He was wearing a rather shabby gray suit, and his manner was a good deal less self-assured. 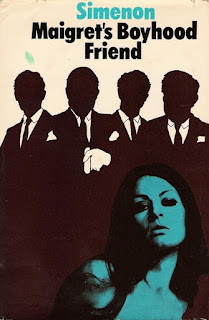