Even if I live to the ripe old age of 97, I'll still insist that life is too short to do ironing.

In fact, those will be my final words . . . those and 'What the hell were the Socialist Standard editors thinking with that Elvis Presley animal rights front cover?' 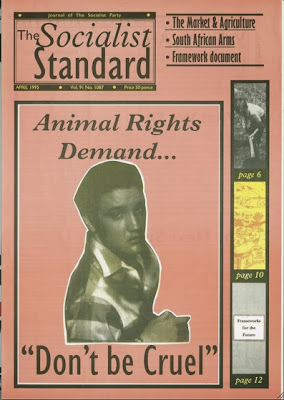 So much for yesterday being a new start.

What will today bring, and will there be an added side of Onion Rings?
Posted by Imposs1904 at 9:15 am No comments: Links to this post

Saints of the Shadow Bible by Ian Rankin (Orion Books 2013) 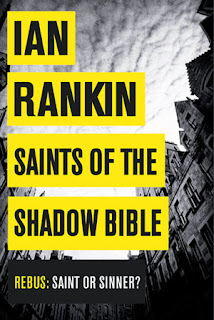 ‘The time you phoned him, did you try a bribe?’

‘Didn’t think it would work. I mean, he’d have taken the cash but then come back for more.’

‘In other words, you’d never have been free of him?’

‘An admission that doesn’t really help your case.’ Rebus paused. ‘What is it he had, Stefan? What could he tell Macari and her team? I’ve been through the custody ledger and there’s half a page missing from the week before Saunders killed Merchant. It got me thinking – could there be something Saunders knew? He comes to you, tells you he’ll do a deal – forget all about it if you get him off next time he’s arrested. You couldn’t know he was going to bludgeon some poor sod to death, so you shook hands on it.’

‘The hearse is arriving,’ Gilmour said, nodding in the direction of the gates. A slow-moving procession of vehicles, the engines almost silent. Wreaths shrouding the coffin, allowing only glimpses of gleaming brass handles, varnished pale wood. In the car behind, the Justice Minister’s widow and son. The First Minister and his deputy had re-emerged from the chapel and were flanking the door, hands clasped as if in prayer, heads bowed.

‘Nothing to say, Stefan?’ Rebus whispered into his neighbour’s ear. Gilmour’s jaw was jutting as he watched the vehicles pull to a halt. The First Minister offered his condolences to the widow, along with a peck on the cheek. She was dressed in black, and wore sunglasses which obscured half her face.

‘Only that you’re making a mistake, John. Sounds very much as if you’ve decided you’re not part of the Saints any more.’

‘Let me tell you something, Stefan. I spoke to Porkbelly and he was all for letting Frazer take the rap for that gun, same as you just did. Seems to me you’ll shit on anyone to save your own necks.’

‘Maybe you think you’re clean, but you’re not,’ Gilmour retorted. ‘You knew we hung on to that gun – why didn’t you take it to the bosses at the time? Remember Interview Room B, that time I walked in and you had your hands around a suspect’s throat? I forget the name now, but it’ll come back to me if necessary. The drugs we planted on that barman we didn’t like? The prossies we let off after an hour in the holding cell, once they’d slipped us a few quid or a promise? The restaurant tabs that never arrived at the end of a meal? Two hundred cigarettes here, a case of malt there . . . The stories we could tell, eh?’

Gilmour’s eyes were boring into Rebus’s.

‘I took the fall, John,’ he went on. ‘And I did it for all of us. Remember that, when you’ve got the tin-opener poised above the can marked “worms”.’
Posted by Imposs1904 at 8:52 am No comments: Links to this post

Still sounds great after all these years. I think I first heard this through Big Sis having it on single. If only Big Sis hadn't taken that wrong turning and started buying those Luther Vandross albums:


That rather sweet video of Roddy Frame performing an acoustic version of 'Spanish Horses' on - I think - Japanese TV has been deleted. I've tried to find it on other video sharing sites but no luck so far.

However, I was able to update Monday Toonage #1 with a link to the official video for 'Spanish Horses' which, now that I come to think about it, wasn't on YouTube when I originally posted a link to Roddy performing 'Spanish Horses' acoustically.

I hope the disappearance of the acoustic version and the sudden appearance of the official video are not connected. That would be an arsey thing to do.
Posted by Imposs1904 at 8:53 am No comments: Links to this post

Monday morning . . . three days before the annual Thanksforovereating  . . . yep, it's time to get back on board the five Socialist Standard articles a day and a half diet. Pass me a Between the Lines but go easy on the Running Commentary.
Posted by Imposs1904 at 7:30 am No comments: Links to this post

With regards to my on/off relationship with Maximo Park, I'm currently ON because of this rather nifty track from their 2007 album, Our Earthly Pleasures:

No idea what the rest of the album is like. I can't get past this track.

He's *cough* living on something

I don't care if it's a set up. I never got Bon Jovi until this moment, this moment here:

As much as I love Prefab Sprout, I don't think you could do this to Lions In My Own Gardens (Exit Someone). Not even Walter White has made that drug yet.

eta: and, of course, it's from three or four years ago. I have to occasionally take my nose out of a book to see what's going on around me. Bear with me.
Posted by Imposs1904 at 1:16 am No comments: Links to this post

Email ThisBlogThis!Share to TwitterShare to FacebookShare to Pinterest
Labels: Bon Jovi, Boston Celtics, The shit you find on Facebook 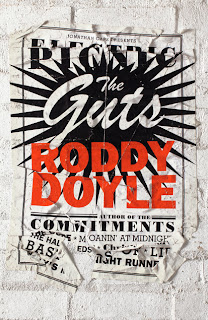 —Not so far anyway.

—Was there much talk about the Eucharistic Congress when you were a kid?

—Big mass, all sorts of processions.

—No, said Jimmy Sr.—No. A raft o' fuckin' cardinals. My parents talked about it all the time. I think it was kind o' like 1990, for their generation.

—It was just the football to start with. But then, when it took off. The penalty shoot-out an' tha'. The country was never the same again. It was the beginnin' of the boom.

—An' it was a bit of a disaster, tha'. But I was never unemployed again - after Italia '90. I wouldn't let myself be. I was always doin' somethin', even before the buildin' took off. Because - an' this is true. We felt great about ourselves. For years after. An' tha' only changed a few years back. Now we're useless cunts again.

—Thanks for the analysis.

—Fuck off. You asked.

—Yeah, said Jimmy's da.—A bit. The country was only ten years old, remember. An' dirt poor. Then, like, the man in the flat next door to my mother's gets a radio - a big fuckin' deal. An' everyone bails in to hear it. She always spoke about hearin' your man, John McCormack, singin' live on the wireless. At the mass. Like he was Sinatra or - I don't know - some huge star today. The Bublé fucker or someone. My father said it was like the whole world was listenin' to somethin' tha' was happenin' here in Dublin. An' it probably was as well. Why did you ask

—An' you came up with that idea, did yeh?

—Fuckin' sure. If you do it properly.

—Oh, I know, said his da.—D'you remember my cousin Norman?

—He'd be your cousin as well, I suppose. Second cousin, or first cousin twice removed or tha' shite. Anyway, he has a huge collection of old 78s an' stuff. 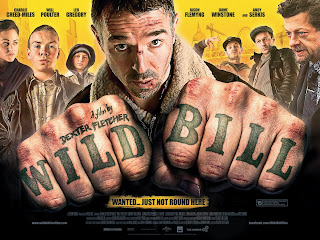