The Naming of the Dead by Ian Rankin (Little Brown 2007) 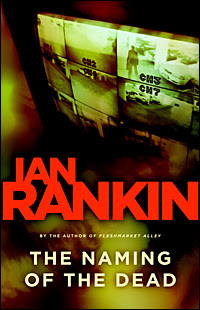 "The barriers were going up. Down George IV Bridge and all along Princes Street, workmen were busy putting them in place. Road repairs and building projects had been put on hold, scaffolding removed so it couldn't be taken apart and used as missiles. Mailboxes had been sealed shut and some shops boarded up. Financial institutions had been warned, staff advised not to wear formal clothing - it would make them easy targets. For a Friday evening, the town was quiet. Police vans cruised the central streets, metal grilles fixed to their windshields. More vans were parked out of sight in unlit side roads. The cops on board wore riot gear and laughed among themselves, swapping stories from previous engagements. A few veterans had seen action during the last wave of miners' strikes. Others tried to match these memories with stories of soccer battles, poll-tax demonstrations, the Newbury Bypass. They exchanged rumors about the expected size of the Italian anarchist contingent".
Posted by Imposs1904 at 4:33 am

A fantastic book. And, talking about fantastic books, I note the front cover of the Socialist Standard mentions The Iron Heel - one of the best books ever. A true classic. After reading that and The Star Rover, you could almost forgive him for all that racist shit he was into - almost, but not quite!

It is a good book. Really enjoyed it.

At this point in my life, I've read that much Rankin/Rebus that it's less a work of literature, and more an old blanket that I could never be without. But it was interesting to note in this novel what Rebus's favourite Wishbone Ash lp was, and where Steely Dan got their name from - appropriate, I'd say.

With regards to Jack London's 'The Iron Heel', I've probably mentiond it before on the blog but I made the mistake of reading a crticial biog of London - by the same SGBer who wrote The Monument - before I read any of London's work.

That meant I was already on the lookout for London's all too glaring and shocking racism when I got round to reading The Iron Heel. (Didn't the Scottish patient bring out a new edition of The Iron Heel about 10 years ago as part of his Rebel Inc imprint, with an old intro from Lev Bronstein?)

Never got round to reading The Star Rover, but I'd like to think that I'll one day pick up Martin Eden and give it a go.

It wasn't so much racism in his writing, more of that was in his quest to find the "great white hope" for the heavyweight boxing world champion in the early part of the last century. Martin Eden, btw, as good as the other two ...

Yes, Rebel Inc did bring one or two of them out. In fact, I think I reviewed Star Rover for a publication I worked for. Cracking review it was too ;-)