"I never exchanged a word with the Colonel. He has no significance at all in what happened during my stay in Oxgodby. As fas as I am concerened he might just as well have gone round the corner and died. But that goes for most of us, doesn't it? We look blankly at each other. Here I am, here you are. What are we doing here? What do you suppose it's all about? Let's dream on. Yes, that's my Dad and Mum over there on the piano top. My eldest boy is on the mantelpiece. That cushion cover was embroidered by my cousin Sarah only a month before she passed on. I go to work at eight and come home at five-thirty. When I retire they'll give me a clock - with my name engraved on the back. Now you know all about me. Go away: I've forgotten you already."
JL Carr's 'A Month in the Country'
Posted by Imposs1904 at 10:16 am 1 comment:

"Move away now - there is nothing to see here."

Don't mind me: Just changing the template to the blog. Hopefully the links will be put back in (and updated) at some point later today. However, if you will still insist on continuing to look at the page - here's something to gladden any eye: 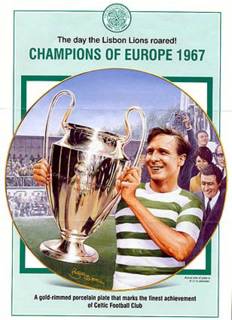 The special blend of mawkishness, overpriced tat and celebration of the greatest ever achievement by a football team is captured so lovingly. Only 50,000 more to sell and Celtic can finally buy that really creative midfield player they have been missing so much since Lubo Moravcik left the club.
Posted by Imposs1904 at 9:53 am 11 comments:

'No Zizek quotes, will Robinson do?'

Currently re-reading the very funny 'Smoking In Bed: Conversations with Bruce Robinson': a series of interviews with Bruce Robinson edited by Alistair Owen, that takes him through his childhood in Kent; through his years as an actor where he acknowledges that he was little more than a pretty face made good in the movies 'cos Zeffirelli fancied him and cast him Benvolio in his 1968 version of Romeo and Juliet; up to his years as a novelist and screenwriter of such excellent works as 'The Killing Fields'; 'Withnail and I' and the 'The Peculiar Memories of Thomas Penman'. The following quote from the book caught my eye 'cos it captures so well the combination of Robinson's gallows humour and his jaundiced view of the capriciousness of the Film Industry:

"We were at a dinner party at Terry Semel's house in Los Angeles, which is like Blenheim Palace. Semel was running Warner Bros, and I think he still does. We were sitting there and clearly audiences were going with The Killing Fields, and Jake Eberts was saying to me 'What are you going to do next, Bruce? I said, 'It looks like I'm going to write this atomic bomb film for Warners, but what I'd really like to do' - and I wasn't talking about me as a director - 'is get my little film made.' He said, 'What is your little film?' - i.e. 'Bring it to us' - and I said, 'It's about two out-of-work actors in London in the sixties.' He said [American accent], 'Fuck! I gotta tell you this, I just had this script over my desk about two out-of-work actors in London in the sixties.' And he proceeds to tell me about Withnail. 'It's the most godawful unfunny thing I ever read. I don't know what yours is about, but let me tell you if it hadn't been recommended I'd never have got through it. It's just shit.' I finally said, 'Yeah, that's my story.' So there you go. 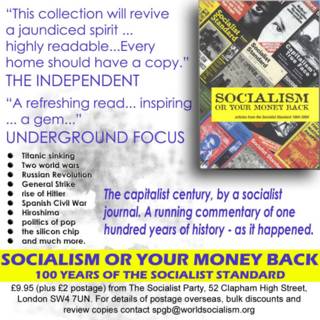 The SPGBer with the high politics and the low spelling, Reasons to be Impossible , has an interesting post here on the American Election, which relates to a previous post of his on the Guardian-shoots-itself-in-the-foot-'fest otherwise known as Operation Clark County. Its an interesting post primarily because of the excerpt he reproduces from the article, 'CAPITALISM WINS 2004 ELECTION BY DEFAULT', published in 'The People', the journal of the De Leonist Socialist Labor Party. The swine beat me to the punch - damn him and his early starts - because I was going to link to the article myself. It's a fine piece of writing. I'll get my own back by saying that I think he's wrong about the SLP being part of the First International. Before he barks back at me that it is myself that has got it wrong, according to Girard and Perry in their admirable wee book 'The Socialist Labor Party 1876-1991: A Short History' (now sadly out of print): "In April 1876, a preliminary conference of representatives of the Internationalists and the Lassalleans met in Pittsburgh and issued a call for a Unity Congress to meet in Philadelphia the following July to form a "Socialist Labor Party." Prior to this Congress, delegates from the remaining American sections of the International met in Philadelphia on July 15 and disbanded that organisation. On July 19 the Unity Congress met . . . In four days the Unity Congress glued together the Workingmen's Party of the United States (WSPUS) complete with an organizational structure, and a program calling for "emancipation of the working classes," "the abolition of all class rule," and the abolition of the wages system." Read it and weep - four days between the disbandonment of the one organisation and the formation of the other. My leftist trainspotter anorak credentials may be a bit moth eaten but they are still intact. Christ, I just know I'm going to be hit with a bad case of schadenfreude for the above comments. What's the difference between the Socialist Labor Party and ourselves? I'm afraid I don't have the spare seven hours to bore you with the details of the internecine strife that seems to beset politicos with newspapers. Save both me and you some time by renting out the DVD of Monty Python's 'Life of Brian', click on the menu and go to the Judean People's Front versus People's Front of Judea scene. Just like every eighties heavy metal band has to pretend to have a sense of humour by saying how much they love Spinal Tap, us lefties also have to put on a brave face and pretend we can see the joke when the Monty Python mob rip the piss out of us in the Life of Brian. I myself pretend with a steely gaze and through gritted teeth, waiting for that day I *cough* accidently bump into Cleese, Palin, Gilliam and co. and demand royalties from them for stealing some of my best lines.
Posted by Imposs1904 at 5:50 am 5 comments: