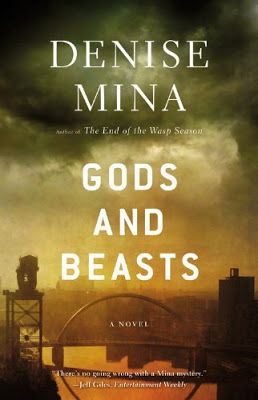 Morrow watched her brother walk into the cafe like a mayoral candidate, waving to other customers, clamping the proprietor's hand in a two-handed shake, nodding to Morrow as he swapped pleasantries with the man's wife.

Danny suggested meeting here because this was how he wanted her to see him: popular, belonging, accepted. The cafe owner looked up to him smiling, slightly awe-struck. Morrow knew then that Danny owned part of this business or had lent the man money. The man didn't like him, he owed him. Maybe didn't register the difference.

It was positive, in a way, that he wanted her to see him as a good guy, instead of in a big car or with totems of his wealth around him, and it was probably a big deal that he came alone, or almost alone. She could see a man sitting in the driver's seat in the big car across the road, but Danny had left him out there.

Still, the cafe business was a cash business, perfect for cleaning up the vast sums of money Danny and his associates were generating every day. The drugs trade was worth more than a billion pounds a year in Scotland. Some said four billion but the source of that number was looking for more funding so she wasn't sure about that. Whatever the absolute number, it was telling that cash businessses were being taken over. Hairdressers, sunbed shops, nail bars, cafes, pubs were being either taken over or opened up to give a credible source for the tidal wave of dirty notes. Some high streets had row upon row of tanning salons right next to each other to account for various people's income. Even nurseries, Morrow had heard, even there the gangs were using businesses and claiming for fifty ghost children attending, all  doing 8-6 every day, all paid for in cash.
Posted by Imposs1904 at 6:05 pm 1 comment: 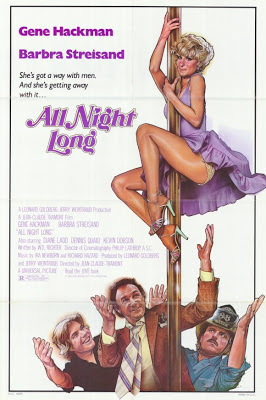 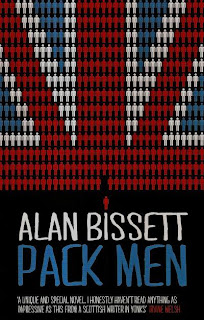 Let us blame nostalgia. I was born in 1984, two years before Graeme Souness took over Rangers and caused a sea-change in Scottish football. Rangers were thinking big and spending big, and the rest of the Scottish league trailed in their red, white and blue wake for well over a decade. I had a phase of Rangers-supporting, which lasted from about the ages of eleven to fifteen (until I grew out of it, y'know, like proper adults should) coming just at the end of the Nine In A Row era, when Rangers won the league year-upon-year and the only thing Celtic fans had to cheer was Ireland winning Eurovision, and when they were still challenging to be a major European club. That kind of thing leaves a mark on a boy, which even the deep mental cleansing of an arts degree can't quite wash away.

Let us blame: Wee Jack. Neil took Jack to a game at Ibrox last month, and Dolby, incensed, demanded of Leanne that he, as the boy's own father, should be the only one permitted to take Jack to a football match. This is despite the fact that Dolby can't even stand football, let alone Rangers, and that Jack described his Ibrox experience with Neil as both 'boring' and 'weird'. So how does Dolby top Ibrox? Manchester. All to get back at some other fucker.
Aye well that's men for ye, son.

Leanne only let Dolby on the condition that Jack wasn't going to be subjected to drunk men pishing against buildings. 'Never mind the songs,' she'd said. 'He cannay understand whit they're about anyway. It's the pishin in public I cannot abide. Dirty.'

Let us blame: given Dolby's a father, I've been working like a pharoah's slave on the pyramids of books at the front of Potterstone's, and Frannie's out spinning discs in Falkirk bars most weekends - fuelling his dream of swapping the early-morning shifts in Tesco for the Radio 1 Breakfast Show, ignoring the playlist with a crisp wink and a thumbs-up to the webcam - we just hardly ever see each other any more. Trying to get the bastards twenty miles from Falkirk to Edinburgh requires the summoning powers of the One Ring. We have to take an opportunity for Lads' action where we can, especially with Brian gone, the same way everyone rushes outside when there's sunshine. I didn't want Dolby being the only poor, lone, not-that-fussed-about-the-Gers-refusenik on the bus, so I came with him. Why not? It's the sort of thing we would've done, way back, when both Brian and I were still in Falkirk and all four of us were presuming our eternal presence in each other's lives.
Posted by Imposs1904 at 11:20 pm 1 comment:

The Roar of the Butterflies by Reginald Hill (Anchor Canada 2008) 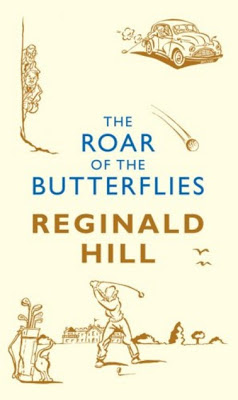 Joe Sixsmith was adrift in space.

Light years beneath him gleamed the tiny orb he was supposed to make contact with, but he knew it was an impossible dream.

His muscles had melted, his lungs were starved of oxygen, and the only part of his mind not paralysed by terror was the bit that dealt with ’fonlies.

‘No use messing with ’fonlies,’ Aunt Mirabelle used to say. ‘’fonlies don’t get your homework done, Joseph. You miss your football Saturday morning, you’ve got no one to blame ’cept yourself.’

How right she was! No one to blame ’cept himself … except maybe Willie Woodbine for being such a socials climber … and Beryl Boddington maybe for standing him up … and definitely Merv Golightly for having a mouth like the Channel Tunnel … but first and last and as usual, himself, Joseph Gaylord (even Mirabelle kept quiet about that) Sixsmith for always going boldly half-assed where nobody had ever come back from before!
Posted by Imposs1904 at 9:31 pm No comments: 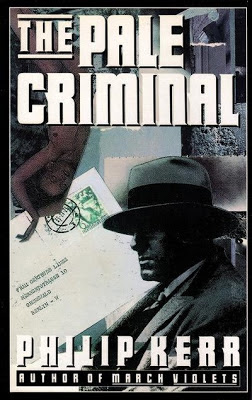 'Thanks. I don't mind if I do.' I swigged a cheekful of the clear grain alcohol thoughtfully provided by the Reichskriminaldirektor, and then took out my cigarettes. After I had lit us both I held the match aloft for a couple of seconds.

'Not an easy place to torch,' I said. 'One man, acting on his own: he'd have to have been a fairly agile sort of bugger. And even then I reckon it would have taken Van der Lubbe all night to get this little campfire blazing.' I sucked at my cigarette and added: 'The word is that Fat Hermann had a hand in it. A hand holding a piece of burning tinder, that is.'

'I'm shocked, shocked to hear you make such a scandalous suggestion about our beloved prime minister.' But Nebe was laughing as he said it. 'Poor old Hermann, getting the unofficial blame like that. Oh, he went along with the arson, but it wasn't his party.'

'Joey the Cripp. That poor fucking Dutchman was an added bonus for him. Van der Lubbe had the misfortune to have decided to set fire to this place on the same night as Goebbels and his lads. Joey thought it was his birthday, especially as Lubbe turned out to be a Bolshie. Only he forgot that the arrest of a culprit meant a trial, which meant that there would have to be the irritating formality of producing evidence. And of course right from the start it was obvious to a man with his head in a bag that Lubbe couldn't have acted on his own.'

'So why didn't he say something at the trial?

'They pumped him full of some shit to keep him quiet, threatened his family. You know the sort of thing.' Nebe walked round a huge bronze chandelier that lay twisted on the dirty marble floor. 'Here. I want to show you something.'

He led the way into the great Hall of the Diet, where Germany had last seen some semblance of democracy. Rising high above us was the shell of what had once been the Reichstag's glass dome. Now all the glass was blown out and, against the moon, the copper girders resembled the web of some gigantic spider. Nebe pointed his torch at the scorched, split beams that surrounded the Hall.
Posted by Imposs1904 at 1:09 am No comments: 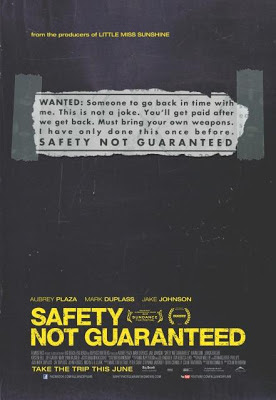 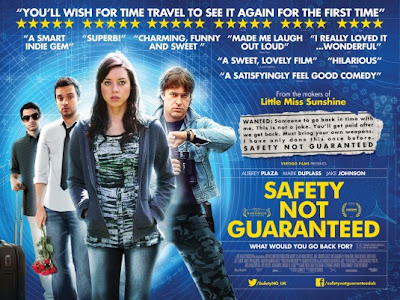 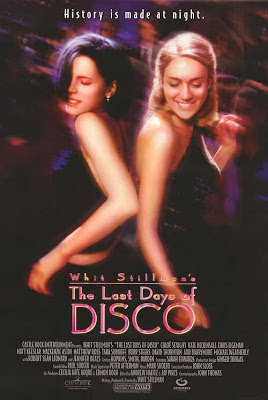 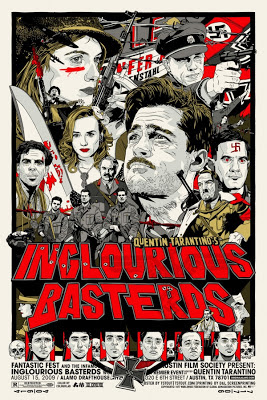 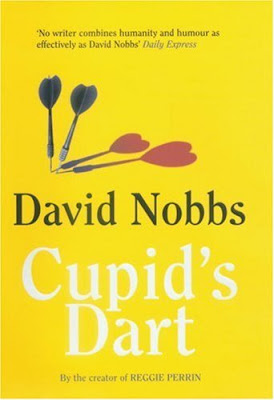 I travelled on the same train today, exactly a year after our first meeting. A year! Was it really only a year ago? Has only a fifty-sixth of my life passed since that day which changed everything? It seems a lifetime ago, and yet it also seems like yesterday. I mentioned that to Lawrence. 'That's women for you,' he said. 'That's what they do to you.' I don't think he likes women - but then, if I was married to Jane, I don't think I would like women either.

I say 'the same train'. I mean, of course, the train that left Manchester and was due at London Euston at the same time on the same day as that train a year ago. It wasn't the same train at all. Well, it might have been, I didn't check the carriage numbers or the name on the engine, such trivia have never interested me, but I think it extremely unlikely. Anyway, I don't give a damn about these linguistic minutiae. Not any more. Not after her. 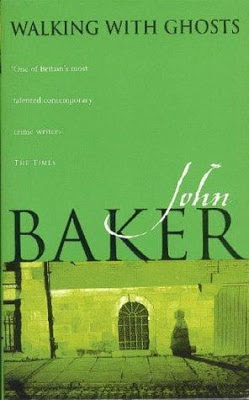 Your mother was a historian, a secret historian. Her account of the Great War is still among your papers in the bureaux. You have failed to edit it for more than thirty years. The truth is, you never wanted to edit it because it was hers. You were jealous of her, as she was jealous of you. Her only achievement, as far as you are concerned, is that she was a cousin of Dylan Thomas (and your earliest memory is of being kissed by him).
'I was kissed by Dylan Thomas,' you have told everyone you ever met. 'He went down on one knee and kissed me on the cheek. I remember being tickled by a day's growth of beard, and the smell of figs on his breath. He was a relative on my mother's side, somewhat removed, but he visited us when he was in the neighbourhood.' You have been a snob about that.
In truth you don't know if you remember it or not. You don't know if you remember Dylan Thomas, or if what you remember is your mother's memory. Because she told everyone the same story: 'Dylan Thomas kissed Dora, you know. She was small at the time, but she still remembers, don't you, Dora? His bristles and a figgy smell, typical childhood observations. He was my cousin, you know, a regular visitor whenever he was in Wales.' You are like your mother. You have become more like your mother as you have grown older. The last ten years have been a nightmare in that respect. You would not have believed it possible. You feel like her. You turn your head when someone speaks and in a flash you recognize the gesture. It is your mother turning her head. She lives in the tone of your voice. Your characteristics, gestures, inflections of speech, they are all inherited. You are reverting to form. Everything you rejected, burned, left behind; it is all reconstituting itself. You have not escaped. You have run away, but you have not escaped.

You laugh because you can see now what you were running from. It is life's oldest comedy. Your mother was not so bad. She was like you. A Swansea girl, born and bred. When you laugh at her you are laughing at yourself.
Posted by Imposs1904 at 4:10 am No comments: