Following a brief discussion with Mailstrom's Alan J a few posts back, I made reference to Tommy Sheridan being one of life's "spawny gets" but, from further investigation, I note that there is little or no reference to the term "spawny get" on the net, save a few passing references to Viz, this blog and the urban dictionary.

So, mindful of giving something back to the english language, I thought I would give an example of someone who is anything but spawny, in the hope that it will better explain who or what a spawny get is.

Last Saturday, Blackburn went 3-0 down inside forty minutes to Wigan at the JJB Stadium only for Cruz to score a pretty nifty hat trick in the space of sixteen minutes to bring the scoreline back to 3-3. What happened next? Wigan struck two late goals and Blackburn went down 5-3 to a team whose forwards up until that point couldn't hit a cow's arse with Mike Harding's banjo.

OK, bad result for the once high flying Blackburn, but let's accentuate the positive: after a strong start to his Blackburn career Santa Cruz goals had dried up in recent months, so three well taken goals pointed to better things for both him and the team.

Fast forward to tonight, and Blackburn are playing a second string Arsenal side (Randall in midfield? Who the hell is Randall? Tony? Derek? No, Mark.) in the quarter final of the Carling Cup at Ewood Park.

Being a second string Arsenal side, naturally enough they go into a 2-0 lead inside half an hour, and one of Blackburn's better chances of getting some silverware is going the same way as Ricky Gervais's career after the Extras' finale. Cometh the hour - okay, the forty-second minute - cometh the man, and Santa Cruz pulls back one back for Blackburn. Cometh *cough* the hour, Santa Cruz equalises and Blackburn's season is back on track. What happens next? Arsenal's Denilson gets sent off in injury time, but the ten man Arsenal edge it 3-2 in extra time. Arsenal go through to the semi final of a tournament they aren't that arsed about, and Blackburn suddenly become incredibly nervous about their forthcoming FA Cup third round fixture at home to Coventry on the 5th January. (Especially as Coventry have a bit of form this season in turning over Premiership sides in Lancashire Hotspots.)

So, to recap, in the space of four days, Roque Santa Cruz has scored five goals in two games. Both times bringing Blackburn back into games they've thrown away in the first half, only for them on both occasions to go on and lose the games when it would have been easier for them to go on and win. That's the best example I can think of, of an 'unspawny get'.

Oh, and Santa Cruz is an ugly bastard to boot. The poor bloke can't get the breaks in life. 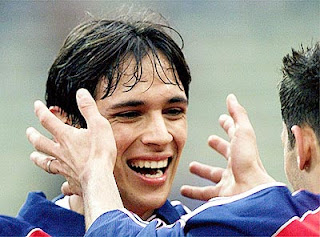 "It's OK, Roque. With some corrective plastic surgery, we can make you look like a real footballer".
Posted by Imposs1904 at 7:12 pm

Just for the record -- "spawny get" is a term that is often used by Geordies. I am most shocked that it doesn't show up in Google that much.

Spawny Gets must be running google as well.

As Jarvis Cocker should have sang, 'Spawny Gets are running the world.'

Now that I think about it, I must have got the term from reading Viz all those years ago, and for some reason I presumed everybody else - geordies and non-geordies - knew what it meant.

I must be part of that lost Viz generation.