The Sound of Young (MySpace) Scotland 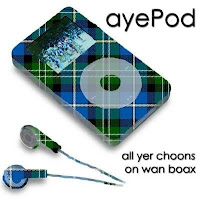 Since I stumbled across them accidently on MySpace about 12 months ago, I've been banging a lonely drum for the Low Miffs, but it's good to see that finally someone from the inkies, the Scotland on Sunday, has also cottoned onto their excellence as well.

I'm cut and pasting the review from the Scotland on Sunday, 'cos the mini review is buried half way down the page:

"In previous years, unsigned bands such as My Latest Novel and Popup have played this event and gone on to bigger things. Thursday's big promise was the camp, electrifying rock 'n' roll outfit the Low Miffs, who have been going since 2003 and thankfully sound completely different to anything else coming out of Glasgow at the moment. Part shambolic, part super-slick German cabaret show, the lead singer, Leo Condie, makes for a perfect master of ceremonies, like Scotland's own Scott Walker with some Jarvis, Jacques Brel and sleazy sax thrown in. In seconds, Oran Mor is transformed into a seedy underground speakeasy as the foppish Condie launches into songs with names such as 'Cressida', 'Earl Grey' and 'Also Sprach Shareholder'. There is even an ode to Kirsty Wark and a moment when Condie leaps from the stage and performs lying on his back on the dancefloor. It's all high drama and good, dirty fun.

Check out their tunes on their MySpace page. Everyone - bar the Grateful Dead fan in West Lothian - will recognise their promise.

Hat tip to Matt C for the picture. Apologies that it took 8 months for me to find an excuse to use it.

It's taken years for me to utter those words, but, there, I have - I've said it now.

I am genuinely surprised by this result. Flummoxed would perhaps be a better term. Harman, the most uninspiring and vapid of the deputy leadership candidates, was also the choice of the Brownite Camp.

What happens to the long terms plans of Cruddas now? Does he see himself as a possible leadership contender if and when Brown loses the next General Election, and does he continue in the same vein with his leftward move?

A pisstake or groanful pun eludes me. Possibly the creepiest picture I've seen on the net in a long time.

Scary snapshot of liggers at the last day of La Liga.

Email ThisBlogThis!Share to TwitterShare to FacebookShare to Pinterest
Labels: Celebrities

People With Too Much Front

A must read post from Andy N. over at the Socialist Unity Blog about the recent “Politics After Blair” conference organised by the Morning Star, but it's as much for Mark. P hoisting SWP'ers Noel on his own petard in the comments to the post for the latter trying to suggest that the SWP's various fronts are " . . . genuine united fronts and therefore being good revolutionaries we put the priorities of building them before building our party as we will grow if they do, not the other way around."

Class in a glass plated house.

For that cheeky bastard, Reidski. A resumption of an ongoing series:

Email ThisBlogThis!Share to TwitterShare to FacebookShare to Pinterest
Labels: I Dream About The 80s, Music, Playlist

According to the Guardian, James Richardson, Fabio Quagliarella can only score spectacular goals - an Italian Matty Taylor? - and after watching this compilation, I think he may be right.

Scroll down the page to click on the video clip, and don't turn the sound down. The tune grows on you.

PS - Apparently Man Utd is looking to sign him. Alan Smith shouldn't be too worried by the news. Seven goals in Sixty-One League games is an excellent return on an investment of seven million quid.

. . . . on 7 June, Mikhail Chesalin, the chairman of the local Dockers Union in Kaliningrad, Russia, was savagely stabbed and beaten outside the union office. An unknown number of assailants attacked Chesalin when he got out of his car, stabbing him numerous times in the spine, and beating him severely about the head. He was left lying face-down, unconscious, in a pool of blood. Chesalin's colleagues believe that the attack was orchestrated by Vladimir Kalinichenko, the General Director of the Sea Commercial Port where the dockworkers' union is currently running an organizing campaign.

When we talk about "urgent action appeals" this is exactly the sort of thing that we mean. It is our responsibility as trade unionists to rally to the support of our brothers and sisters in Kaliningrad and to demand that attacks on trade unionists cease and workers' rights be respected. Please send your message of protest today:

And most important -- pass this message on, mobilize members of your unions, let's send thousands of messages to Russia today.

With These Hands I Demand the Future

One of my favourite blogs, Socialist Unity Blog, has switched to Wordpress.
Posted by Imposs1904 at 6:01 am 1 comment:

Email ThisBlogThis!Share to TwitterShare to FacebookShare to Pinterest
Labels: Blogging, The Left

Reidski in the comments box below reminded me that June 12th was also the date the Derek Hatton was expelled from the Labour Party. Wasn't 1986 also the year that Liverpool won the double, beating Everton in the FA Cup final? That really was an annus horriblus for the Pierre Cardin section of the old Militant Tendency.

Fascinating to read that the vote on the Labour NEC to expel Hatton was only won by 12 votes to 6. Six people voted against Hatton's expulsion? OK, I'm guessing that Benn (Tone) and Skinner (Dennis) were on the NEC in '86, but who were the other four who were prepared to give so much slack to the most prominent member of the 'It's just a newspaper, honest' reading circle?

Maybe the Parcel of Jonahs over at Dave Osler's comment boxes are right when they opine that the Labour Left's strength is but a shadow of its heyday in the eighties, and there's no way back. If a decent and straightforward bloke like John McDonnell can't muster up sufficient numbers to even ensure that there is a token leadership challenge against Gordon Brown then the Labour Left really has done a Captain Oates these last ten years.

I remember encountering the old Millies in the Labour Party Young Socialists, and even then there seemed something amiss about them, but from this point in time it's weird to think that someone like Hatton was ever taken seriously. I can't help but smile when I think of Steve Coleman's words when he was reviewing Alan Bleasdale's drama, GBH, in the pages of the Socialist Standard:

"Militant renamed it BGH: Bleasdale Gets Hatton. Hatton himself went on Channel Four's Right To Reply to say that Michael Murray must have been based on him because the fictional character was a bullying, corrupt council leader." [The Eileen Critchley Show, August 1991 Socialist Standard]

Whatever did happen to Degsy?

"I'm an autumn boy on the endless search for summer"

Just realised that today's the 103 anniversary of the founding of the SPGB.

*Cough cough* Happy Birthday to the 'Roaring Boys' (too many lighted candles on the cake is playing havoc with my sinuses). You don't look a day over eighty-five. Bet you never thought you'd last this long . . . fuck, bet you thought that you'd be up and gone at some point after your tenth birthday. (Shades of that scene from Von Trotta's 'Rosa Luxemburg', where Rosa and Karl Kautsky share a toast of sorts for the coming socialist century.)

OK, that's enough from me before I start staring darkly into the distance. I'll need to cheer myself by listening to 'Tropical Brainstorm', whilst the rest of you check out the recently updated Socialism Or Your Money Back blog.

I fell in love with a real city boy
Who's afraid of his nature, afraid of his joy
I punched him out and brought him to this hut
But I know he'll thank me when he wakes up
We got trees, we got snakes, we got acres of sky
His life in the city was making him cry
'Us Amazonians'

The World Turned Upside Down

Never thought I'd pen these words, but a really funny article from the anarchist journal, Freedom.

Hat tip to Will Rubbish.

I can't be arsed to blog at the moment, so expect 73 posts in the next four days by way of contradiction.

Doesn't Chase Me, I'm in the Cavalry do this sort of thing? Posts on his blogs, I mean . . . not the perverting of young'ish minds. Chuck Connors should have been locked up, which ever way you look at it.

The real reason why Steve Sidwell chose not to sign for Newcastle.
Posted by Imposs1904 at 2:19 pm 1 comment:

Email ThisBlogThis!Share to TwitterShare to FacebookShare to Pinterest
Labels: Football

Done* May Days in London, Edinburgh, Glasgow and New York. Made it to Tolpuddle; Labour Party Conferences; Anarchist Bookfairs; Left Field at Glastonbury; Globalise Resistance CONferences (remember them?) etc etc, but I never did make it to the Levellers Day at Burford in Oxfordshire. Maybe I will one day.

That's my roundabout way of saying that the latest post to the Socialism Or Your Money Back blog is the text of the leaflet that various SPGB luminaries distributed at last month's Levellers Day event.

*Done can be roughly translated as swapping magazines with the that bloke from the Communist Workers Organisation, swapping witticisms with the Ashbourne Court mob and swiping a bundle of Socialist Reviews from a SWP stall and redistributing the magazine to a grateful working class.
Posted by Imposs1904 at 12:16 am 3 comments: