Banksy Punks Disneyland Bush The War On Terror Everybody 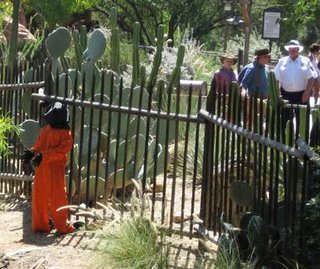 None of that Paris Hilton shenanigans - driving Ms Hilton to drink, who in turn drank herself to drive - this is Banksy back to the good stuff by placing a life-size replica of a Guantanamo Bay detainee inside the Big Thunder Mountain Railroad at Disneyland in California at the weekend, resulting in a situation whereby [the] "security staff shut down the ride and removed it amid fears over public safety." 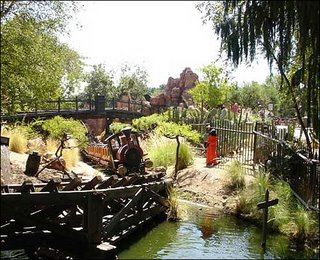 Yep, that's right, they would have had a riot on their hands, with all the wee kids stamping their feet and wailing at their parents that they weren't interested in Mickey, Donald and the motley crew of dwarves. They would much rather have their picture taken with the stoic guy in the orange boiler suit. (Excuse the cynicism, I've been contaminated by Carl Hiassen's Native Tongue.)

More on the story at The Wooster Collective

Hat tip to Alan J. at Mailstrom for the link.

This is hot... I'm going to add this blog to my blog on myspace hope you don't mind good stuff man.

Thanks for putting it on myspace, blogxilla. Love it! Go, Banksy!

Life-sized? Was it an Al-Qaida midget?