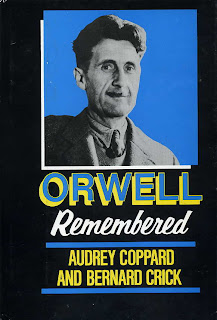 A bit of a departure from the usual business of cutting and pasting a paragraph to give you a flavour of the book just read.

As it's Orwell, and as it's a book given over to reminiscences, I've decided to cut and paste three passages which give you both a sense of the book and of the man . . . and of where I'm coming from now that I come to think about it.

And that was typical of him. I remember his comment when I told him of an experience of mine in the early 1920s. In those days the Communist Party enjoyed very little prestige in England and was still affiliated to the Labour Party. One day I was at a Labour Club in north London and someone said: 'You must meet our Communist poet.' I was then introduced to a dishevelled looking man whose name, to my astonishment, I recognised as that of a distinguished member of the Symbolist group. When I told Orwell about this many years later he said: 'Ah, but in those days, you see, it didn't pay to be a Communist; and it's a pretty safe rule to say about anything that as long as it doesn't pay it's all right.' Justice, in other words, is always with the weaker side because it does not pay to join it. But he certainly sometimes carried the principle to absurd lengths, and this aspect of him was wittily described by Mr V. S. Pritchett in an account of how Orwell once advised him that he ought to keep goats. The chief point being, so Mr Pritchett gathered, that it would put him to a lot of trouble and he would be certain to lose a lot of money; and Orwell got quite carried away with enthusiasm as he expounded the 'alluring disadvantages' of the scheme.

Let this point be made clear: Orwell did cope with the baby. It may have been romanticism, but, if so, it was romanticism that found practical expression. This was characteristic of him in all he did. His idiosyncrasies were based in guts.

He would still go out at night to address protest meetings - 'probably a blackguard, but it was unjust to lock him up' - and the baby would be left to sleep for an hour or two at our house while Orwell was haranguing his audience.

'What was the meeting like?' one would ask on his return.

'There must be about two hundred of them altogether. They go round to everything of this sort. About forty or fifty turned up tonight, which is quite good.'

This down-to-earth scepticism, seasoned with a dash of self-dramatisation, supplied a contradictory element in Orwell's character. With all his honesty and ability to face disagreeable facts, there was always about him, too, the air of acting a part . . .

While he was attacking the bullies on the right he nearly starved to death. Once he turned to the bullies on the left, the right having been temporarily beaten, he made his fortune. This was due to no lack of integrity on his part. For he never fell for Communism for a moment although he was more deeply concerned with social justice than most men, and more unselfishly so than some. It had cost him plenty in the thirties and on the left to be so uncompromisingly anti-Communist, yet he liked reading Trotsky and even more reading Rosa Luxemburg. For all his masculineness the fact that it was a woman who had such a good mind, a better one than Lenin's, did attract him.

As for the British anarchists and near-anarchists, vegetarians and sex reformers, he found them the most disappointing of all. As they never had the slightest chance of getting into power anyway he thought that they might as well have stuck to their principles, whereas all they seemed to do was get bogged down in the mess of their doctrines. About their principles, they chopped and changed, like a Christian Brother on a debating platform with a lot of non-conformists. He loved Bartolomeo Vanzetti, however, as much as I do; whose hands were smelly with the smell of the fish he peddled, but to whom all the poor of the whole world were what Beatrice was to that great Florentine, his countryman. Because of him, Piedmont can stand unashamed in front of Tuscany. At the trial of the anarchists during the war, the British judge, Sir Norman Birkett, as he then was, behaved better in his role than did the prisoners in the dock in theirs, which of course was a better role.