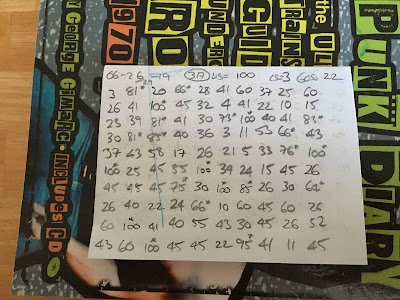 
Just trying to catch up. Comments and observations will be spasmodic. Why 'Brooklyn Calling!'? Well, that's the dialing code, and we never did change our numbers when we moved to Indy. Go figure. Maybe it's a sign . . . probably not. Nothing to read into the Dart stats. Still mediocre at best, though it is a saving grace that despite 100 being a disappointingly high score, at least I hit 8 of them during the drawn out session.

Anyway, here's a music video to break up the bitty text. Why XTC? Because YouTube told me  . . . and because I'm half-rereading their biography on archive.com at the moment. Why Mayor of Simpleton? Again, 'cos YouTube's algothingy told me. Not one of my favourites but it does hold up:

Totally messed that up. 317 is the dialing code for Indy. How’s that for a Freudian slip?