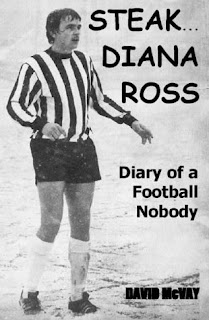 Sunday, 3rd March, 1974
The game, though, falls into the Twilight Zone. Eric Probert, Arthur Mann shut down the supply route to the front men. John Robertson and Ian Bowyer aren't getting time to exert their considerable talents on the game. For a quarter of an hour, nothing happens, literally. The crowd is silent, not baying or taunting, more dozing off after a good Sunday lunch.
"For Christ's sake David, get a fucking tackle in on him." It is Don Masson; Masson the Miserable, Masson the Merciless, our leader. He's right, of course. Despite being a most obnoxious piece of work and about as popular as a turd arising in the communal bath, he's absolutely effing right.
Must clobber the flash bastard. Supposed to man-to-man mark him and haven't even seen his backside yet. The game's just passing me by. Come on, get a grip. Here's the ball, there's McKenzie - whack. That was easy.
"Well done Davie. Well fucking done son. That's fucking better, eh." Masson the Merciless has passed judgement. I have pleased our leader. I feel 10ft tall. McKenzie looks hurt as if to say: "Who the hell are you to kick me you fat bastard?"
I don't care. Today, the Notts County shirt seems a liitle loose and baggy.
Posted by Imposs1904 at 12:08 am