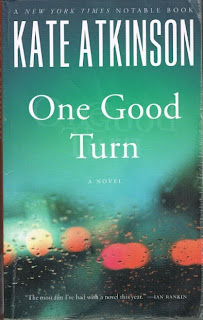 He was lost. He wasn't used to being lost. He was the kind of man who drew up plans and then executed them efficiently, but now everything was conspiring against him in ways he decided he couldn't have foreseen. He had been stuck in a jam on the A1 for two mind-numbing hours so that it was already past the middle of the morning when he arrived in Edinburgh. Then he'd gone adrift on a one-way system and been thwarted by a road closed because of a burst water main. It had been raining, steadily and unforgivingly, on the drive north and had only begun to ease off as he hit the outskirts of town. The rain had in no way deterred the crowds - it had never occurred to him that Edinburgh was in the middle of 'the Festival' and that there would be carnival hordes of people milling around as the end of war had just been declared. The closest he had previously got to the Edinburgh Festival was accidentally turning on Late Night Review and seeing a bunch of middle-class wankers discussing some pretentious piece of fringe theatre.