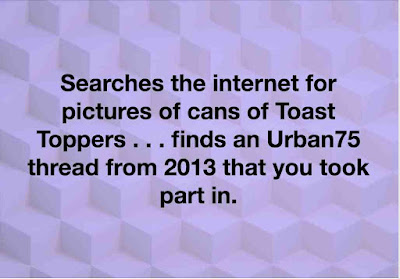 Tried to explain the wonders of childhood Toast Toppers to the family in lockdown, and they just weren't buying it. It appears my descriptive powers are not as shit hot as I first thought. It didn't help that I also fell on my arse trying to describe a top cooker grill to them . . . 'You mean, it's like a broiler?' No, it's not a bastard broiler.

In exasperation, I dove into the internet, hoping to find a half decent pic of Toast Toppers in all its  last century glory but all I found was a thread from 2013 on Urban75 where people were shitting all over Toast Toppers. And, yep, I was in the middle of said thread, trying to defend the wonders of Toast Toppers. I'm living in a fucking time loop, people. No wonder I'm coping better than most with this lockdown repetition b/s.

Some of the better quotes from that 2013 thread. (I've removed the user-names, to ensure that the guilty are protected despite their snacking sins.):
And this particular contribution won the internet that day: