Cop Killer by Maj Sjöwall and Per Wahlöö (Harper Perennial 1974) 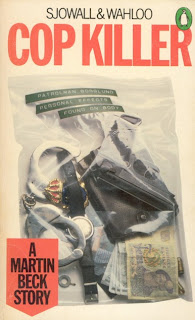 He drank down his vodka in a sort of rage.

'The welfare state,' he said. 'I heard about it all over the world. And then when you see this shit country, you wonder how in hell they've managed to spread all those lies and propaganda.'

He refilled his glass.

Martin Beck didn't know exactly what he ought to do. He wanted Mård reasonably sober, but he also wanted him in a fairly good mood.
'
Don't drink so damn much,' he said experimentally. ‘What?'

‘What the fuck did you say? Here in my own house?'

'I said you shouldn't drink so damn much. It's a hell of a good piece of advice. Besides, I want to talk to you, and I want some sensible answers.'

'Sensible answers? How's a person supposed to be sensible in the midst of all this shit? Anyway, do you think I'm the only one sitting around drinking himself to death in this wonderful welfare state?'

Martin Beck knew only too well that Mård was not alone in his dilemma. For a large part of the population, alcohol and drugs seemed to be the only way out. This applied to the young as well as the old.

'You ought to see the old men at my so-called pub. The hell of it is, not one of them has any fun drinking. No, it's about as much fun as turning on the gas for a while, and then turning it off again when you're groggy enough. And then open it up again when you start to come around.'

Mård stared heavily at his dirty glass. . 'I've had some damn good times drinking. In the old days. That's the difference. That was in the old days. We used to have a hell of a time. But not here. Other places.'

'In Trinidad-Tobago, for example?'

'Oh, we usually find out a lot of things,' said Martin Beck. 'Most things, as a matter of fact.'

'Well you wouldn't fucking believe it to see the cops around town. I often wonder why you use human beings at all. Over at Tivoli in Copenhagen they've got a mechanical man who pulls a gun and fires when you put in a coin. They ought to be able to fix him up so he'd lift the other arm too and hit you with a truncheon. And they could put in a tape recorder that says, "All right, what's going on here?'"

What he was really laughing at was the thought of how the National Commissioner would react to Bertil Mård's proposed reorganization of the force.

But he kept that to himself. 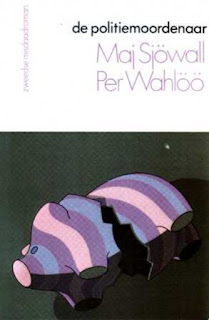