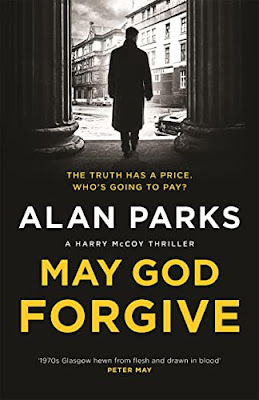 Miss Drummond took a sip. ‘Did you know my brother?’ she asked. ‘Before yesterday I mean?’

‘Not well,’ said McCoy ‘But we ran into each other every now and again.’ Wondered if she knew what Ally did for a living.

‘At Paddy’s Market?’ she asked. Then smiled. ‘No need to be discreet, Mr McCoy. I was well aware of what Ally got up to.’ She stirred her tea. ‘I wish you had known him when he was younger. He was different then, vibrant, full of life.'

'What happened?’ asked McCoy before he could stop himself. ‘Sorry to be blunt.’

‘Don’t worry,’ she said. ‘Disappointment happened. My brother studied at Glasgow University, English Literature. Was very good at it, even got a first-class honours.’

The shock must have been written on McCoy’s face.

‘Not what you were expecting to hear, I imagine. He was a brilliant young man, Mr McCoy. Everyone had high expectations, thought he would become a lecturer at the university, but he didn’t want to do that. He spent the next two years writing a novel. Put all he had into it. Every publisher told him how brilliant it was but none of them would publish it.’ She smiled again. ‘These were the days before the Lady Chatterley trial. My brother’s book dealt in sexual obsession, pulled no punches. They asked him to amend it, tone it down a bit, but, ever the artist, he refused. Eventually he got it published by Olympia Press in Paris. Do you know them?’

‘They published the more controversial novels: Alexander Trocchi, Henry Miller, that sort of thing. They also published books with the sexual content but none of the art. Those ones financed the books they thought were of literary value. My brother’s was one of the artistic ones. The Love Chamber it was called.'