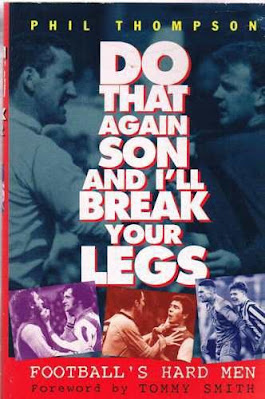 Only once did I deliberately set out to try and hurt someone and that was years later in a charity game for a little amateur club in Belfast. The manager told me: ‘There’s a lad playing on the other side who says he’s going to kick you.'

I replied: ‘If he wants to kick me he will.'

It didn’t worry me. I’d spent my professional career playing against players like Smith, Harris, Reaney, and Dave Mackay of Spurs, who was unquestionably the hardest man I ever played against and certainly the bravest. This time it was just a cocky kid with ideas above his station. He was as good as his word, however. He followed me everywhere. He kicked me and he kicked me again. I told him: ‘This is ridiculous, this is an exhibition game. It should be fun.'

He kept on kicking and he started insulting me. All the usual stuff like, 'You’re past it, you’re a has-been, you won’t finish the game.’

I said, 'If you kick me again, you won't finish the game.’ He did. So about ten minutes later I deliberately knocked the ball a little too far forward, or so he would think, knowing he was going to come for it. And when he did I turned him and hit him above the knee. As they carried him off, he was crying like a kid. While he was lying on the ground the captain of our team went over to him and said, ‘Kittens don't fuck cats.’

I felt very upset about it afterwards. I went to see him after the game to apologise. His manager said, ‘Don’t worry, George, it’s taught him a lesson - don't fuck with a truck.’

George Best, taken from The Good, the Bad and the Bubbly